Just one of those unexpected things that make great memories.

My friend and colleague Kath and I went to the city yesterday for a professional development seminar.

As it finished late in the afternoon, we decided to break the 230km trip home with dinner. We stopped at a place we both enjoy, and had a great burger and fries, and some brilliant onion rings.

Leaving the restaurant, we waited at the lights outside to cross the street. That little red man stayed red for ages, and we must have stood there for at least five minutes waiting for the lights to change. As it turns out, we’re not such law-abiding citizens as all that: it was cold, so in the end we just crossed because there was nobody around. We were expecting the lights to change when we were half-way across, but they didn’t.

I made jokes about him being a very angry red man who was no longer doing anything for anyone.

Kath made jokes about the next car to come along sitting at the lights, which by then would have changed, and the driver shaking their fist at waiting for a red light when there was nobody wanting to cross the street. 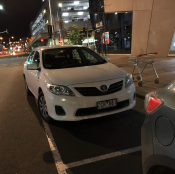 Our levity changed direction a little when we got to the car, and found that the car parked behind us had been parked really badly, which has been a pet peeve of mine lately, because I know you actually have to learn to park a car properly to get your licence. Having snapped a photo for posterity, and possibly for Instagram, we got into the car and pulled into the street for the drive home. There was no traffic to merge with – just us, so that was easy.

As we approached that very same set of traffic lights, they were still green. And right before we got there, they changed.

We sat in the car waiting for that red light for another five minutes. And we laughed and we laughed, because we’re English teachers, and we understand irony.

Learning to say “no!” more effectively changed my life.