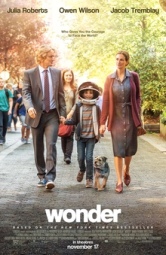 Today I accompanied my school’s Middle Year students on a trip to the cinema to see ‘Wonder’, a new film based on the bestselling book by the same name about a boy who has facial differences.Jacob Tremblay plays August Pullman, alongside Julia Roberts and Owen Wilson who play his parents. The stage is set when the Pullmans decide that Auggie should start 5th Grade in a mainstream school, having been homeschooled by his mother until then. Mandy Patinkin plays a very wise and empathetic school Principal, Mr Tushman.

What a sad world we live in when a kid gets less attention walking through the city or a park wearing a space helmet than he does when wearing his own face. It’s human nature, I know, but that doesn’t make it okay. This film challenges that “default setting” in a very compelling way.

Auggie’s teacher, Mr Brown, challenges the kids to ask themselves: What sort of person am I?
This movie challenges every audience member to ask themselves the same question. How do I deal with difference? What does my face tell them? What kind of friend am I? What monuments do my deeds leave?

The audience feels sympathetic to Auggie long before they see his face. When he says, “I know I’ll never be an ordinary kid ordinary kids don’t make others run away from playgrounds” it’s like a punch in the stomach that leaves you winded.

As the movie rolls on, we also see that the “regular” kids like Auggie’s sister, Via, have their own challenges with acceptance and friendship, even without the extra challenges that some kids face. Over and over, this film reminds me again just how cruel kids— and people in general— can be, in so many ways.

The journey of discovering who is real and who is not is often painful and traumatic. Together, Auggie and Via realise that they are each other’s best friends, and lean to rely on each other for the support and love that they need to get through each day.

The development of genuine friendship reminds us that looking past the surface to really see someone is what makes a crucial difference to anyone, but especially those who are so aware of that surface. There is also a painful reminder that even the nice kids can make mistakes when they focus on appearances instead of who someone really is.

This movie delivers so many powerful lessons about accepting others and even more about accepting ourselves. In both cases, we need to learn to live according to the precept established by Mr Brown in Auggie’s first lesson in 5th Grade: “When you have.a choice between being right or being kind, choose kind.”

It sounds simple— perhaps too simple. But is it?

The hardest part may be in finding the willingness to step out of our comfort zones and open our own minds to each other and the possibilities that our differences bring.

Everyone old enough to understand the difference between kindness and judgement should see this film.