Today, I took the opportunity to ask Dad what Christmas was like for him when he was young.

I spent some time in the car with my father today, and as we travelled the presenter on the radio was asking people to call in and talk about family memories and traditions at Christmas time. This was a great opportunity to ask Dad what Christmas was like for him when he was young, so that’s exactly what I did!

My father grew up in Holland during the Depression and World War II. His family were not really poor, but neither were they rich. My grandfather worked very hard to provide for his family, and both he and my grandmother managed their resources carefully.

The house was usually not decorated much for Christmas, but they did have a Christmas tree lit with candles. Dad also remembers the large fir trees that were put up in the churches, almost as tall as the roof.  Some were lit with electric lights, but most were lit with candles. As many churches were built of wood, this was a cause of many fires. I can understand how the sight of such a big tree, lit and decorated, in a church would imprint itself on the memory of a young lad.

Christmas was a time when family would visit and often put on Christmas plays for one another. It was usually the children, but sometimes grownups too, who  would act out  the story of the first Christmas or plays about Sinterklaas and his companion, Swarte Piet.  A play like this was usually the only observance of the St Nicholas tradition in my father’s family, although for some Dutch families, Sinterklaas is almost as big a celebration as Christmas itself. By the time Dad was a teenager, it was more common for people to listen to stories or plays on the radio than to perform them at home for their relatives.

Gifts were generally not exchanged by adults, but the children received a book as a gift.  Dad also remembers that this was the time of year when children of a certain age – probably 11 or 12 years old – were presented  with a Bible of their own by the Sunday School of their church.

I can’t imagine how strange their first Christmas in Australia must have seemed to them in 1951. Even then, it would have been such a world away from how we celebrate Christmas now. Commercialism and materialism have seen to that. 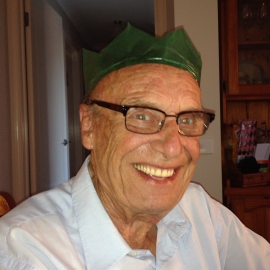 Having just turned 86, Dad celebrates Christmas on the other side of the world in the heat of summer, with trees illuminated by LED lights, a plethora of Christmas movies and ‘Carols by Candlelight’ concerts on TV . Family is still a focal point for all of us – my grandparents’ values have been firmly imprinted on us in that way, even if we do indulge in giving and receiving gifts that are generally luxuries. Dad, his sisters, and their families are spread across this enormous continent, so visiting happens via Skype and phone calls, while photos and news are shared on social media.

I do like to think, though, that there is still a sense of wonder at a pretty Christmas tree being lit up at night, and I hope that people stop to hear and reflect on the story of Christmas that goes beyond reindeer, presents and “being good”.

2 thoughts on “My Father’s Childhood Memories of Christmas”