I want to acknowledge two authors who were my first inspirations with all things Gothic and macabre.

As a woman who both reads and writes horror, that’s an exciting prospect. I am set to be be featured on some blogs and websites this month, and I’ll be sharing posts featuring other authors on my social media, too.

First though, I want to acknowledge two authors who were my first inspirations with all things Gothic and macabre.

Emily Bronte was the author of the Victorian Gothic classic ‘Wuthering Heights’ and some very dark, moody poetry. It was a significant change in the literature of the time – it was so dark and fraught with anger and tension that many readers really had no idea how to respond to it. I also think it is a sign of her literary genius that she wrote a book that became recognised world-wide as a masterpiece and a classic, despite the fact that there is not one single character who is likeable throughout the whole work!

She is also a very fitting figurehead for Women in Horror Month, given that she and her sisters couldn’t get their books published until they deliberately put masculine pen names on them instead of their own. For the most part, we’ve moved beyond such Victorian prejudices and embraced the  myriad wonderful books that have been written by women, although there are still some today who suggest that women who write horror should publish under their initials or a pen name to avoid such discrimination. How is it even possible that this is still a reality 170 years later? 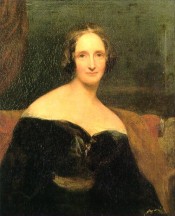 Mary Shelley wrote  the Victorian Gothic/horror classic ‘Frankenstein’ in a competition with  her future husband, Percy Bysshe Shelley, the poet Lord Byron and another man named John Polidori to see who could write the best horror story in a given time. Not only did she write something incredibly powerful and ground-breaking on a number of levels, she beat three men at their own game in the process.

These are just two of the women in the course of literary history who made an event like Women in History Month a possibility for female authors and for readers of all persuasions in the 21st century.
What a debt of gratitude and honour we owe them.

One thought on “Women in Horror Month: Inspirations”