Guess who got nominated again for Top Female Author 2019?

‘Smoke and Shadows’ has been nominated in the Poetry category – the same one in which Nova won in 2017.

It’s fair to say I am excited!

It couldn’t have come at a better time. The crazy busy pace and emotional demands of the last three weeks and the stress I have been under because of things outside my control have really worn me down, and while I’ve enjoyed the release of ‘A Rose By Any Other Name’, I haven’t really given my books or my writing the attention they deserve at all the past month or so.  I’ve started a number of poems lately, but haven’t finished any of them… yet.

It’s really nice to know someone loved my book enough to nominated it. I love it, and I’m proud of it for so many reasons – but that is no guarantee that anyone else is going to. The reviews have been good, though, so I have reason to hope that others will enjoy reading it, too.

It’s also very timely reminder that there are things which transcend those times of stress and exhaustion in our lives that seem to take over and leave no time or energy for anything else.

Of course, we know that, but sometimes we forget to keep that thought in our mind. It’s amazing the difference a little bit of encouragement and support can make.

Winners are announced on July 8th. I’ll be sure to let you know if I win!

An award such as this is signifies a job well done and a book worth reading.

I’m very excited to show off the new bling on the cover of The Silver Feather.

I received notification a couple of months ago that The Silver Feather had won ‘Official Selection’ in the short story category of the New Apple Summer eBook Awards, but the award didn’t arrive until today.

The original email explained that an Official Selection was awarded when the judges were unable to make a decision between two books for first and second place.

So it’s basically equal first, I thought, I can live with that. Holy Toledo! I’ve won another award! I told my husband. I texted my best friend. Naturally, I began to wonder what the other book was, and figured I would have to wait until official announcements were made.

Then one of the Indie Fabs messaged the rest of us and announced that our anthology, Once Upon a Fabulous Time, had won something in the New Apple awards.

Well, blow me down if The Silver Feather didn’t tie for first with the anthology containing my two fantasy/fairy tale novellas, alongside those excellent stories penned by my fellow Fabs.

I was perfectly happy with that, as there is nobody I would rather share first place with than my Fabs.

So Once Upon A Fabulous Time has some lovely new bling on the cover, too! 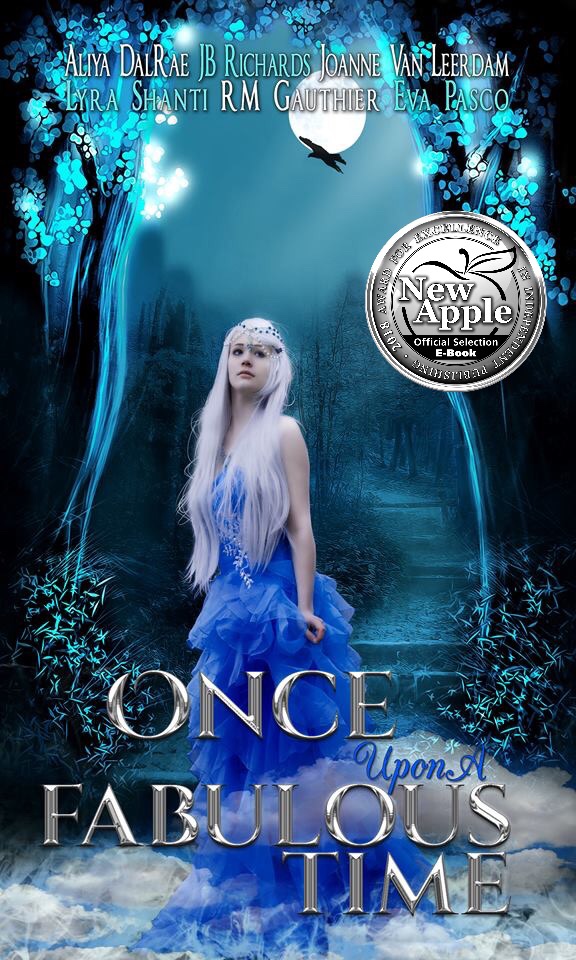 It’s exciting to show it off, but the deeper value is in the encouragement that an award like this gives to an author. These awards are judged by experts, not popularly voted or arbitrarily given.

These badges on our covers are an assurance of quality and excellence in storytelling. They are something of which we can be justifiably proud because they signify a job well done and a book worth reading.

When you put everything into doing the best job you can for your students, it is awesome and absolutely exhausting at the same time.