This weekend and last I achieved one of my ultimate theatre goals as an actor, singer, and not-quite-a-dancer in Monty Python’s Spamalot! The Musical.

A lot of people have done an incredible amount of work, both on stage and off, to bring the show to life and make it run smoothly and professionally.

It’s a really, really funny show. By the time our cast was done with it, it was non-stop hilarity and good times for the duration of each performance. To be honest, that was pretty much the order of every rehearsal, too,

Sure, there have been moments of frustration and, occasionally, despair for some of us. More than anything, though, it has been fun. It’s fair to say that however many tears may have been shed in tiredness or anxiety, a hundred times more have been borne of laughter.

From our first read-through of the script to taking our bows of the final night, we have laughed together, learned from one another, inspired and encouraged each other.

From the final week of January to the second week of May, the cast members have grown from acquaintances into friends. Those with whom I have worked most closely have begun to feel like family. It’s fair to say that they understand my love for theatre and performance more than most members of my family, and it seems they have fully accepted my own individual brand of weirdness and subversive humour. I have found my theatre tribe.

Today, dismantling the absolutely amazing sets and cleaning the theatre felt kind of surreal. Yesterday I had tears because I didn’t want it to be over. Today, tears threatened again as reality set in: the show really is done.

My heart is heavy, and even though my Fibromyalgia-plagued body and permanently rather dodgy spine are expressing a strong and well-earned sense of relief, I regret nothing.

At the end of it all, I am blessed to count these amazing people as my friends, and to be able to say “see you next time!” with every confidence that there will be another show and we will be keen to do it all again.

All photos in this post are by Joel Barker aka Sir Bedevere, and have been used with permission.

I commented here recently that life had been hectic with work, rehearsals and all my other commitments each demanding sizeable chunks of my time.

That has gone up another notch or two this weekend with full days of dress and tech rehearsals for Monty Python’s Spamalot, which opens on Friday May 3rd.

The sets are magnificent and the crew are great. The directors are positive and proactive and their standards are high. My fellow cast members are talented, encouraging and supportive. The band is that good, it would be worth just coming to hear them play without any of us being on stage. We’re all having a blast because the show is hilarious and great fun. There is no doubt this is going to be a sensational show.

Thus far, I have managed to keep things under control for the most part, and get things finished by deadlines and due dates.

It’s fair to say, though, that I would not be doing anywhere near as well as I am without the consistent, faithful support of my favourite co-star: caffeine.

It will continue to play a crucial supporting role this week— possibly even more so, given that the week ahead is further complicated by two evenings of parent-teacher conferences sandwiched between school and rehearsals, almost an hour’s drive away from where I work.

Anyone who wishes to tell me that caffeine isn’t good for me or suggest that I cut back would be well advised to wait until after the final show, at least.

Until then, I will continue indulging in my “morning  cup of don’t hurt people” as my husband and I like to call it, and rewarding myself with as many others as I need to get through each day.

As for keeping me awake at night? I honestly don’t think that will be a problem. I’m beat.

Every year on April 23rd, my family celebrates Shakespeare’s birthday with cake. I always do some reading from a play or sonnet, but my husband isn’t so fond of that as he is of the cake, so it’s usually either a solitary activity or one I share with my dog. It’s a well-established fact that Abbey the Labby loves the Bard… and cake.

This year, though, my homage will take the form of several hours of rehearsal for a different comedy – Monty Python’s Spamalot – before I am able to indulge in birthday cake. It does seem fitting that the show is a little bawdy, somewhat irreverent, and absolutely hilarious.

While the precise date of Shakespeare’s birth was not recorded, the date of his baptism was registered as April 26th, 1564. Because it was traditional for babies to be christened three days after they were born, it is generally accepted that William Shakespeare was born on April 23rd.

In an ironic twist, Shakespeare died on the same date in 1616. Some people think that is awkward, but I think it’s a pretty cool achievement. I’m not sure how common it is for people to die on their birthday, but one of my grandfathers  did, so it’s a feat that has always been a point of interest for me.

So, here’s to The Bard, his works, and his legacy.

This weekend is crazy busy. One evening and two full days of rehearsal for the show I’m in, which hits the stage on the first two weekends of May.

The show is Monty Python’s Spamalot, performed by Camperdown Theatre Company. We’re working hard and having a blast rehearsing it, although one of the hardest parts is not laughing at the genuine comic talent of the actors.

While most of my social media for the weekend could be scheduled and was organised by Friday, and there were only a few “on the spot” things I needed to do, I decided ahead of time to spend as little time online as I could over the weekend. Any spare time I have will be spent resting and relaxing, which means reading.

One of the lovely things about poetry is you can read it, and keep thinking about it at odd moments during the day. It adds a dimension of beauty and calm to a hectic schedule, and opportunities for reflection that might not otherwise offer themselves.  Even just a few lines can change a perspective and transform a moment into something that lifts the entire day.

Another lovely thing about poetry is the sense of connection the reader has with the poet. Despite the fact that many of my favourite poets have been long dead, I can still experience a moment of empathy and understanding that reminds me that I’m not doing life in a bubble.

That is my hope for my own poetry. I may not become famous, or even widely known, for the poems I write, but I know that my own readers experience that same connection with me because their reviews and communications tell me so.

So, even in the midst of a busy weekend, I’ll always make time for a little poetry.

It’s the last day of March, which brings us to the end of Women’s History Month. In all honesty, I’m feeling a little sad about that.

Blogging about some of the less well known  heroines of ancient and medieval history has been a most enjoyable occupation. I had fun creating some historical memes to accompany the posts and promote them on my social media, too.

I also loved writing about some of the courageous women who willingly took on situations of conflict, oppression and segregation in the 19th and 20th centuries.

With those great stories told, I am feeling a little like I do when I have just finished a great book and I don’t really know what to do with myself.

Yet I know that tomorrow  I will feel differently because there are some great things happening in April: not only is it (Inter)National Poetry Month, but it’s also a month-long celebration of Indie books in the Read Self Published group on Facebook.

The first half of the Pead Self Published month will feature a specific genre or set of genres each day, which readers are free to peruse. The second half of the month will be focused on helping each individual visual reader find what they want to read. There will also be some giveaways, which are always fun — especially for the winners!

Everyone is welcome to join in those events, which is aimed at showing readers what they want to read without the “hard sell” that many find offputting.

I know with all of that going on, I will have some great things to share.  I will be posting some of my favourite poems on this blog, and Book Squirrel will be sharing some great reads and book suggestions in various genres.

On a personal level, there will be continued rehearsals for the show I’m in, a very well-earned and much needed two week long term break, and a camping trip over Easter that I am really looking forward to.

So, away with my sadness. I shall welcome April with open arms and a great deal of anticipation. 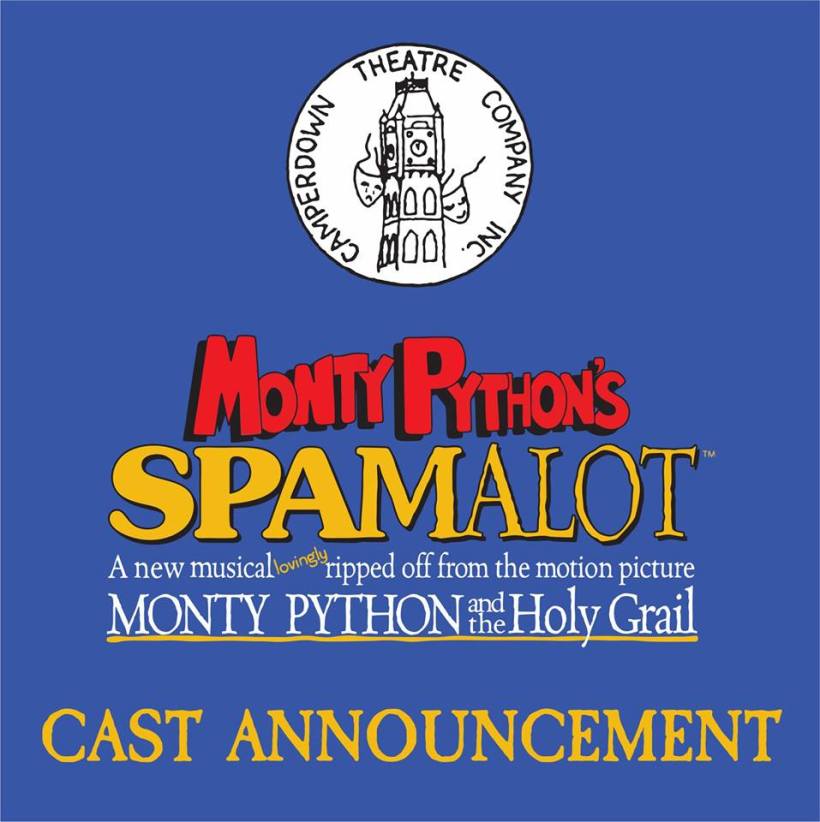 In yesterday’s post I wrote about my most recent post-surgery progress, and mentioned that I went to Camperdown in the afternoon. I was, however, rather secretive about my reason for being there.

I do hope you found that to be cleverly tantalising, but just in case you found it highly annoying, let me explain. I had to keep a lid on the details until certain showbiz announcements had been made public by Camperdown Theatre Company.

I auditioned for a part in next year’s musical: Monty Python’s Spamalot!

This is one show I have always wanted to do, yet I thought I might never get to because it’s too risqué to ever be considered for performance at my school.

Last night I received a call thanking me for my audition, and advising me that I have been given both an acting cameo as the Lady with the Shrubbery and a the role of the minstrel who sings the bawdy song about Sir Robin. I also get to sing the Monks Chant in a small ensemble.  If there is anything I love more than Pythonesque shrubbery, it’s Pythonesque bawdy songs. I cannot put into words how excited I am about these roles, and about the show in general.

The other excellent fact is that these roles require only minimal choreography, which suits my newly disc-depleted spine perfectly. The directors have been marvellous in giving me roles that I can do without asking me to do things I can’t.

The cast list is now on the CTC Facebook Page, and while it may not mean much to most people who see it, I can tell you these people are stellar performers and I am so proud to be rehearsing and performing alongside them. As with any show, being part of this cast will be lots of work but tons of fun.

If you’re anywhere near Camperdown, Victoria, keep the first two weekends in May 2019 free so that you can come and see the show.

And as the show dates draw nearer, you can rest assured… I’ll spam you!